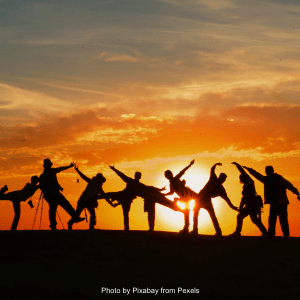 What is Everyone Else Doing (WT509)

This week, I want to talk to you about a concept called “Social Proof”. It’s a psychological construct. In his book, “Influence”, Robert Cialdini describes it in great detail but I’ll give you the brief version here.

Stick with me, it’s very relevant to what’s going on in the world today.

“Social Proof” in this context refers to people checking to see what other people are doing before they take action. We’re not talking about “Social Proof” in marketing where you get a third party to endorse you and give you a testimonial, although I can see where that came from when you look at the psychology.

Cialdini references some shocking events like the “Jonestown Suicides” in South America where 909 individuals died, all but two from apparent cyanide poisoning, in an event termed “revolutionary suicide” by leader Jim Jones. The disturbing thing about this is that the majority of the people voluntarily took the poison, reportedly in a peaceful and ordered way.

This event led to psychologists asking how this could happen, which leads us to the construct of “Social Proof”. We look to others to see what they are doing, so that we know what to do. The odd thing here is that we believe/expect that the other people actually know what the right thing to do is.

I found this fascinating when I became aware that I too was looking for social proof at a caravan park. I wasn’t sure whether the garbage bins were divided for recycling so I looked inside to see “what everyone else had done”, assuming of course, that they were correct and they knew the right thing to do.

This type of behavior was further researched when in 1964, a 28-year-old woman known as Kitty Genovese was stabbed to death across the road from where she lived in New York and although lots of people saw and heard what was happening, not one person even called the police, let alone went to her aid.

How could this be?

It was “Social Proof”. We look to see what everyone else is doing as a reference point for our behavior. Since the research we now know that you are better off if there is just one other person available if you get into trouble rather than a group, because in all probability the group will stand back waiting to see what everyone else does (it’s known as the By Stander Effect).

So, why am I writing about what seem to be such morbid stories?  It’s because we’re in a time of crisis with the current situation and I want you to be aware that if you follow everyone else and look to others for “Social Proof”, be mindful that “everyone else” may not know the right thing to do either and they may just be waiting for you to step up and be the leader and show them what to do.

Don’t assume that everyone else knows what to do.