Can you be highly successful in business and highly spiritual at the same time? Let’s take this question a step further. Is there a direct relationship between your spirituality and great success? The answer is a resounding Yes, as you’ll learn from this week’s guest, Founder and Leader of the Highly Sensitive Entrepreneur ® Movement, Heather Dominick. A Highly Sensitive Entrepreneur® is a person with highly sensitive abilities who has chosen to use these sensitive traits within the world of self-employment. Most likely as a highly sensitive person you’ve been given the message over time that your special qualities are not assets but hindrances. But in truth you’re coded to be extremely successful as a coach, healing practitioner or creative entrepreneur. You are what Dr. Elaine Aron, one of the primary researchers of the high sensitivity personality trait and author of the book Highly Sensitive Persons, refers to as a “royal advisor”. The key is learning how to use your highly sensitive abilities to support you in being purposeful, profitable and empowered as an entrepreneur rather than scattered, poor and undervalued. In order to do this you must approach marketing and selling in a “new way”. Join us as Heather shares how to create your own Business Miracle®. 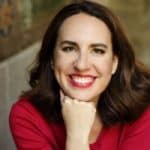 Heather Dominick is a woman who is impressively successful and highly spiritual. A former high school drama teacher who collaborated with none other than Bette Midler. A graduate of NYU where she received her first coach training.

Heather is the winner of the 2015 Best of Manhattan Coaching Award and creator of the 2014 Stevie Award winning virtual event A Course In Business Miracles®: 21-Day Discovery Series that attracted close to 6,000 official registrants from all around the world including: Iceland, Nigeria, Russia, Asia, South America, Australia, Europe and the U.S.

She has appeared on Lifetime Television and has been published in numerous books including Stepping Stones to Success alongside Deepak Chopra.

Heather is also the founder and leader of the Highly Sensitive Entrepreneur® movement.