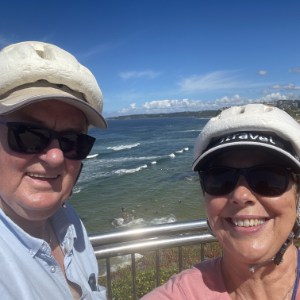 “Is that an electric bike?” asked one of the kids in the caravan park where we’ve been staying.

“Does it go really fast?”

“Have you got to peddle all the time?”

Ross chatted with them and answered their questions.

They didn’t push the point for a ride and I couldn’t help admire their confidence to ask for what they wanted. Straight up!

I love how kids don’t prejudge an answer.

I love how they simply ask for what they want.

It makes me curious. At what point do we learn that it’s rude to ask for what we want or that people will think less of us if we ask or any number of variations on this theme?

If you get a Yes, you’re in front.

If you get a No, you’re no further behind. You’re still at the same spot you were when you asked.

If you have trouble asking for what you want, my recommendation is to go to https://www.goforno.com/ and order the book Go For No by Andrea Waltz and Richard Fenton.

It’s required reading in my Leading Yourself and Leading Others Experience.

The message is clear, “If Yes is the destination, No is how you get there.”

This week why not be childlike?

Why not ask for what you want?

P.S. Our next free monthly webinar will be held on Friday 14th May at 11:00am Sydney (AEST) time. This month we’re focussing on improving team productivity through a secret system. Check out our Events Page for more information.

P.P.S.Invite your friends to get the Weekly Thoughts delivered directly to their inbox. Go to https://shirleydalton.com/weekly-thoughts. It took me a long time to figure out that when I made a request of my mother and her reply was, “We’ll talk about that later,” it was code for “No, that’s not happening. Definitely not.”

Why she couldn’t just say “No”, always intrigued me and then I found out that she wasn’t the only one who used codes.

One of my former boss used to say, “I’ll consider it”.

My friend’s mum says, “I’ll have a little think”.

What does your boss or mother or father or partner say?

I’m curious. How many of the above apply to you?

I’m fascinated by how many of us, me included at times, will shy away from simply saying, “No thank you.”

In fact, when we don’t speak our truth, we are actually lying by omission.

How many of you in sales would much prefer to hear “No”, as quickly as possible, so you can move on and not harass people who aren’t interested in what you have to offer, as well as not waste yours or their time?

In fact, Richard Fenton and Andrea Waltz wrote a book, titled “Go for No” to explain why it’s so important (if counter intuitive) to “Go for No”, rather than chasing a “Yes”.

They get excited when they hear “No” because it means they are closer to a “Yes”. For example, one of my clients wanted to find a girlfriend so he set himself a task of getting 100 “No’s”. The rationale behind this is that the 100 “No’s” meant that he would keep asking ladies out on a date, and not be upset if they said “No” because he simply crossed that one off the list and moved to the next. Consequently, he gave more invitations, and therefore actually got more dates.

So the moral to the story this week is two fold.

Give it a go and let me “No” the outcome!